Amid the many youth aging out of foster care, there are individuals who struggle daily to overcome the challenges of aging out. In 2011, almost 900 youth were between the ages of 18 and 21 years old and had aged out of care in New York City. Maureen (not her real name) is one of them.

Hard working and responsible, Maureen works full-time as a last-night cashier at a fast food restaurant on Manhattan’s Upper East Side. Thanks to her foster mother’s caring and supportive home environment, she was able to graduate high school and enroll in college; although she recently took off a semester to save money.

When Maureen aged out, she left her foster parent and returned to her grandmother, who had originally abandoned her to foster care. When a youth’s foster care maintenance payment is no longer provided by New York City, he or she will often have to find a new place to live.

A youth will have to leave their foster home or residential setting, unless granted an exception from city policy, have secured their own apartment (public or supportive housing, or private housing) or been discharged to a family member’s home, which they can move in to right away. 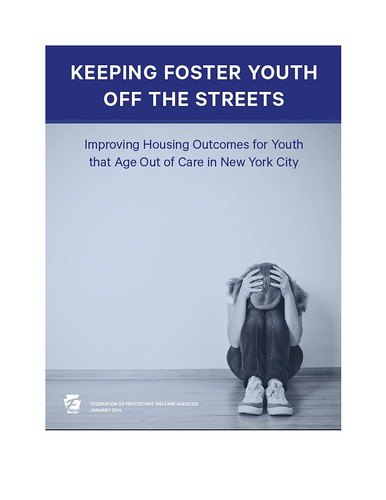 After numerous years of foster care and the experience of aging out, Maureen’s relationship upon being reunited with her grandmother was unstable.

Maureen explains: “She’s like, ‘oh, don’t use my address for nothing.’ That means I can’t get my meds. I can’t get social security… After like three months she like, ‘ohh, pay me $20 a week for rent.'”

Shortly after, her grandmother made her leave the house and with nowhere to go, she ended up in an emergency homeless shelter.

Maureen’s story of homelessness can be tied to New York City’s shortcomings in providing adequate housing options and aftercare services for youth aging out of care. These are the major findings of the Federation of Protestant Welfare Agencies (FPWA)’s recently released a report, “Keeping Foster Youth off the Streets: Improving Housing Outcomes for Youth that Age Out of Care in New York City.”

Youth have trouble adjusting to independence after spending so much time in a rigid, structured system. It is estimated that between 18-26 percent of New York City foster youth become homeless. On any night, former foster youth can be found couch-surfing or sleeping on the streets, park benches, and shelters.

Within three years as many as 231 youths, who aged out in 2011, are likely to enter a homeless shelter. This does not include the youth temporarily staying on the couch of someone they know or sleeping on the streets.

Private agencies offer programs to prepare youth to live on their own. While some youth take advantage of independent skills training workshops and support services, others resist, saying the workshops are not useful.

Aged out youth frequently receive ineffective preparations in spite of detailed state regulations, a well-organized city plan, a complex reporting system for providers, specialized housing services and targeted permanency programs. They usually lack independent living skills, are under educated, unemployed, and without adult figures to depend upon financially.

Bureaucracy and funding limitations create roadblocks in the housing application process. For the truly dedicated and committed caseworkers, preparing youth to age out requires resources, personal attention and time to build relationships in order to engage at-risk youth. Due to increasing demands and low salaries the high rate of caseworker turnovers makes it increasingly difficult to assist youth.

Despite the city’s regulations to ensure housing before youth age out, youth often end up homeless because of their inability to find a permanent home. Even those discharged to families frequently slide back into unstable environments with unprepared caregivers and dysfunctional or unstable family members.

Of the youth lucky enough receive public housing, many are evicted for not paying rent after losing their job or public assistance, engaging in inappropriate activity or having behavioral problems. As a result, they too struggle unsuccessfully to maintain their housing.

Homelessness comes with a cost. Besides the waste of lives, its costs can be calculated in the millions of dollars in terms of crime, prison and re-entry, public assistance, the use of homeless shelters, Medicaid and other social services.

There is significant social return and economic savings that will result from investment in the reduction of homelessness amongst youth aging out of care.

Noah Franklin is a Senior Policy Analyst at the Federation of Protestant Welfare Agencies (FPWA).

Want to share your opinion or analysis with colleagues in the youth services field? Join our one-of-a-kind Blogger Co-Op, and share in the benefits from your work!

New York Gov. Andrew Cuomo (D) vetoed legislation late last week that would have expanded due process safeguards for parents accused of abusing or neglecting their children. The bill would have significantly reduced the time […]

Before You Talk Medication, Talk Stability

“He won’t sit still.” That is the complaint of a foster mother who had three-year-old Jesse delivered into her care. Not only will he not sit still, she said, but he fidgets while she is […]

In a world where “social distancing” has become a necessary practice and the primary preventative measure for reducing the spread of coronavirus, we must remember that children in foster care and their families have already been […]